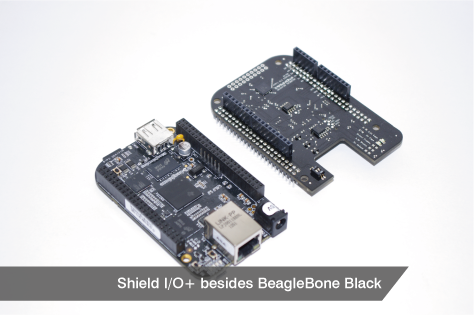 Shield I/O comes with dedicated level shifters for all 14 digital GPIO pins, PWM, I2C and SPI. Something interesting to note is that part of Shield I/O comes from an Atmel ATTiny that lets the user switch logic levels through software over I2C.

The device uses two TXB0108 level shifters for standard I/O lines and one TXS0102 shifting the I2C bus. Shield I/O also comes in a “Plus” version, which features a MCP23017 that is also accessible over the I2C bus.

Andreas saw a need for Shield I/O while working with microcontrollers that had to be rebooted to switch between different programs or adapt to new settings. He wanted to give developers an option for a ready-made Arduino Shield to use with a powerful embedded device, BeagleBone Black. Shield I/O makes it possible to communicate with Arduino shields without re-flashing or rebooting the whole system.

Andreas chose BeagleBone Black because of its power and compatibility.

“It’s the most powerful embedded device out there with enough PWM, SPI, I²C, Timers, analog inputs, which can be muxed to fit the Arduino pin mapping including 2 PRUs to get high speed timing wherever it’s needed,” Behrend stated.

Andreas is a student currently employed by impressx media, who supports the Shield I/O. Additionally, Andreas has worked as a graphic designer and has run his own business. His next project is in the works and will be used in the healthcare industry – a tracker used by doctors to monitor a patient’s overall health.

For more information, or to donate to this project, visit Shield I/O’s IndieGoGo site: http://igg.me/at/ShieldIO/x/3353417