I’m on my way home from Maker Faire and I am still in awe that Beagles where everywhere! Clearly, BeagleBone Black is quickly becoming the embedded computer of choice for makers of all types. To start, BeagleBone is on the cover of Make Magazine and the huge banners of the magazine cover at the show. Within the enclosure of the OpenROV open hardware underwater remotely operated vehicle kit and ocean exploring project, you can just make out the outline of an included BeagleBone!

Above on the left is the cover of Make Magazine and on the right is Eric Stackpole sharing
with a young explorer at the show what the OpenROV community has made.

Back on land, one of the physically largest, or at least tallest, exhibits at the show is also driven by BeagleBone. Benjamin James of coolneon.com about his BeagleBone based LED wall.  The wall consists of over 1,000 LEDs fed by an SPI serial port from BeagleBone.  BeagleBone is also performing animations and he even has a massive scale Tetris implementation written by Christopher De Vries where kids share the controls and need to cooperate to succeed.  He’s also got a mode that uses another computer connected to a Kinect camera to feed information to the BeagleBone such that the LED wall can be “conducted” as if in a concert.  Benjamin is a huge BeagleBone fan looking to bundle up his LEDs and BeagleBone-based controller so that anybody can make some incredible light displays.

Above on the left is a picture of the BeagleBone-based LED exhibit to the left of a full concert stage. On the right is an interview I did with the maker, Benjamin James.

Benjamin wasn’t the only one showing off LED lighting solutions using BeagleBone and sharing source.  Paul Stoffregen of DorkbotPDX out of Portland, Oregon has a BeagleBone Black based LED display solution fed by stomp pads connected to his affordable Teensy microcontroller modules, a webcam and his open source software.  Openness and performance were huge factors for Paul as he tried using another popular low cost computer and found it was dropping frames. That non-Beagle computer simply didn’t have the performance he needed and he found it dropping frames—all problems that went away using BeagleBone.  Another factor for his choice is the consistent build quality he’s found using boards from Circuitco and BeagleBoard.org.  He did much of his development on his laptop computer and was able to move his code over to Beagle without any hassles in about half-a-day.  He also notes that BeagleBone Black ships with the video-4-linux (V4L) drivers that enabled easy use of a webcam to drive his LED array.  You can read more about his experience on his dorkbotpdx blog post about getting ready for this event.

Above is a quick interview I did with Paul Stoffregen about his BeagleBone Black based LED display.

I was able to grab a couple of other quick interviews with BeagleBone Black users at Maker Faire, including Marcus Schappi of Ninja Blocks and Edouard Lafargue who built a model train exhibit.  Both of these users are running Ubuntu, perhaps the most popular desktop Linux distribution, on BeagleBone Black (as opposed to the Angstrom Distribution image shipped with the boards).  Because BeagleBone Black runs armv7 instructions, it can run the latest Ubuntu builds for ARM.  Both of these projects are focused on connecting sensors and controls to a web interface. There are great community write-ups on getting Ubuntu installed on BeagleBone Black.

On the left is an introduction to Ninja Blocks. In the middle is a quick interview I did with Marcus Schappi of Ninja Blocks at Maker Faire. On the right, Edouard Lafargue shows off his BeagleBone Black based web controlled train.

In addition to the ability to run Ubuntu, Edouard chose to use BeagleBone Black thanks to the project’s true open nature including an open hardware design where he can get all of the design materials and documentation, and not need to use any closed binary blobs to boot his hardware. Porting his application from his Mac to his BeagleBone Black was simply taking only about half a day.

I spent much of my time at Maker Faire running around with my BeagleStache moustache camera running OpenCV.  Below is a quick stache tweet I captured of Brian Jepson in the Maker Shed.  While I was there, I also checked out the stock of BeagleBone Black.  They didn’t put out the BeagleBone Black boards until Sunday, but that didn’t keep them from selling out before I managed to get back again.  They also had a kit I haven’t seen on-line yet that was $65 and included a pre-release preview of Matt Richardson’s book “Getting Started with BeagleBone: Linux-Powered Electronic Projects With Python and JavaScript” and several other goodies including multiple breadboards and LEDs.  The kits sold out as well.

At #makerfaire? Give @jadon your card for the chance to win @beagleboardorg #beagleboneblack or #badtothebone! twitter.com/BeagleStache/s…

I had many great discussions with other people showing me their BeagleBoard.org related projects including stuff they had now and stuff they were creating.  A tremendous thanks to Hunyue Yau for doing so much to educate people about BeagleBoard.org with his BeagleBone-based ProtoBone Android tablet prototype. Hunyue focused his booth on BeagleBoard.org activities and answered question after question after question about BeagleBoard.org and BeagleBone. He was also kind enough to share his space with a couple of volunteers from Ansync Automation, Sam Miller and Tom, who partnered up with Uncanny Vision to demonstrate a BeagleBone-based robot using Ansync’s motor controllers and Uncanny Vision’s UncannyCV. They created a really cool and powerful color tracking robot that gave dozens of aspiring young makers joy in following them around on the expo floor and making its R2-D2 sound effects.

Another huge thanks goes to Drew Fustini, who frequently played host to Jessica and I, introducing us to many of the great makers that he knows and bringing the whole Texas Instruments crew out to Jeri Ellsworth’s Bring-a-hack event. Drew brought a hack he got from the BeagleBoard.org community: an RF spectrum analyzer running on BeagleBone Black with a USB connected $25 receiver. 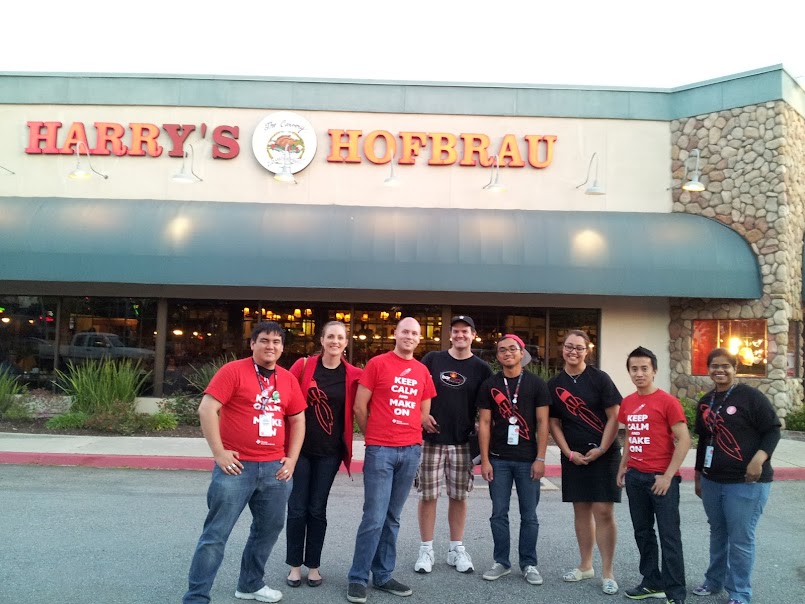 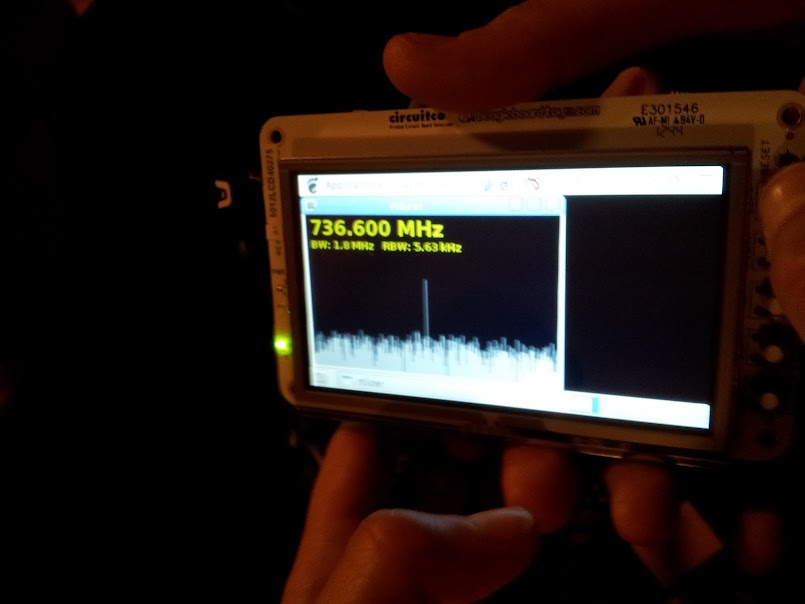 Above on the left is Drew Fustini. In the middle is a picture he took of the TIers going to Jeri’s Bring-a-hack event.  On the right is the RF spectrum analyzer Drew demonstrated at the event.

The whole experience was once in a lifetime and I never want to miss another Maker Faire. If you’ve ever thought about making something, anything, I really, really encourage you to register your idea on beagleboard.org/project, tell people about it on Google+ and the BeagleBoard.org Google Group getting their collaboration as needed, then propose it to one or more of the upcoming US Maker Faires or even the inaugural Maker Faire Europe in Rome still accepting applications until June 2nd.  Happy Beagling!